At this point I had a meeting with Cate to show her my character design for Knut. She gave some great feedback-

Based on that feedback, I revised the character design on my computer, fiddling with the body proportions.

From there I started resketching the character, making the face rounder and the chin less pointy. This version of Knut I call the ’round-cheek’ version.

The body proportions started to look better with this version, and his character was more closely aligned with the text- Knut is a very innocent, sweet and gentle boy. His hairstyle is more consistent now too, with the two little bits of fringe coming down on either side and the little curl at the end. It was a lucky design, because when Knut wears his Viking helmet, his fringe pops out from the front, making him still recognisable. 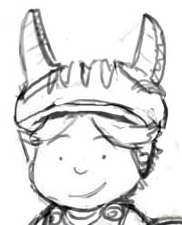 I had been working on Knut for a long while at this stage- my first sketch had been in June 2009, and the round-cheek sketches were from March 2010 onwards. Here’s how he progressed. Which is your favourite?

Next week- I show you how I made a  clay model of the round-cheek version of Knut.