I grew up in a house that my great-grandparents built in 1936. Four generations of my family have lived in the house (only two at a time though); my parents and sister still live there. Its a Californian bungalow design, common in older suburbs around Perth like East Fremantle and Mt Hawthorn.

I remember snippets of visiting my great-grandparents when they were still living in the house. I was only 3 or 4. Great-grandma would take a tray of just-baked cupcakes out of the Metters stove. We would sit in the front room and eat, while family members with big white moustaches that I didn’t know the names of looked down from frames on the mantlepiece. Great-grandma was always smiling, at least I think she was- or maybe that’s a made up memory based on the only photos I know of her. I don’t remember great-grandpa very much. In his photos he looks kind.

Pop’s house in The Last Viking is essentially my family home. Obviously my parents don’t live in a house with Viking ornamentation all over it, but the basic similarities are there.

The idea for the viking dragons and the ‘wishbone’ sticking out the front came from research sketches, right at the beginning of the process.

The layout of the driveway, backyard and back shed is based on my aunty and uncle’s old house in Wagin- here’s a photo I took of my brother by the back door, aged 4, where you can see the shed and driveway in the background.

And here’s my first design for Nan and Pop’s house (roughly the same as the final version of the house).

I also did a cutaway, showing the internal rooms. The first storyboards had scenes in a few different places in the house, and I wanted to make sure that views out the windows were correct and consistent. 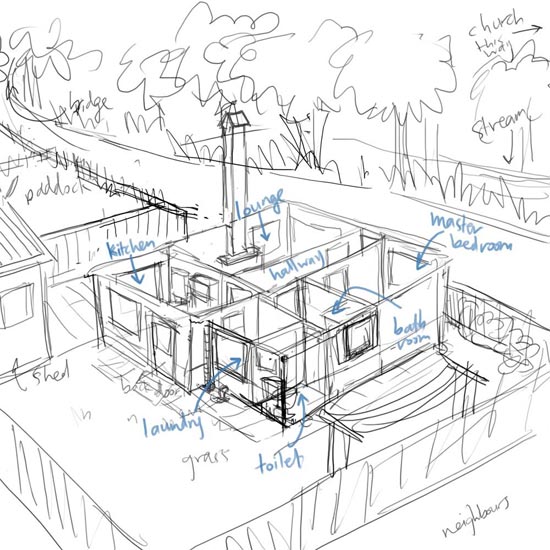 You might notice that there isn’t a spare bedroom, which begs the question, where does Josh sleep? I figure there’s a spare room in the loft (see those windows in the roof?). Pity we didn’t get to have a scene in there. Maybe it will get to be in the animated movie version (wishful thinking).

Here’s an early version of page 7, where we see Nan and Pop’s house for the first time.

Our editor at Fremantle Press, Cate, suggested I change the angle for more drama- here’s a sketch in preparation for the final version.

Now the house looms over the family, with the Viking details poking through the panel border. It’s been gratifying to have kids notice these little details when I show them the sketches.

One thought on “Set design- exteriors”

The Last Viking turns 10 in 10 days. ⁠
📚 Very happy to be one of @cityofsouthperth libraries’ 2021 children’s literature champions! 📚
I had a ball working with @nordangliaeducation over the past year on their global campus comic book competition. Students from Nord Anglia schools around the world were invited to create a comic about an invention that could help tackle climate change. First I pulled together a bunch of videos to teach the students the skills they would need to write and illustrate their own comic stories. Then the students made their comics. Four winners were selected in different age categories, and their prize was to have their winning comic recreated by me! Here’s a preview of the winning comics. Congrats to the winners, you made such fantastic stories!!
🦁 In The Lion is back in print! 🦁⁠⁠
Here's a little excerpt from my comic serial 🦑 Get Kraken 🦑, featured in this year's @theschoolmagazine. ⁠
I don't do freelance jobs often, but this was for a friend and it was too much fun to pass up. ⁠⁠
I'll be at the WA Day festival at Burswood Park this coming long weekend!⁠⁠
Some fantastic news: my next picture book Stellarphant is headed to the USA! ⭐🐘🚀🇺🇸⁠