There’s only 5 weeks until the release of The Last Viking Returns (Sept 1st), and each week until then I’ll show some more behind-the-scenes images.

I’m focusing on one of the main settings in the book – a theme park called Viking World. The theme park has many places where patrons can buy food and souvenirs, just like a real theme park.

Most of Viking World is in fact based on a real theme park – Universal Studios in Singapore. Norman and I attended conferences in Singapore in 2012 and 2013, and on both occasions we set aside a day to visit Universal (you can read more about our adventures here).

I remember vividly the entrance to Universal Studios and the sense of awe I felt. I knew it was all fake and ridiculous and designed to unburden me of my wallet, but I got caught up in the spectacle and the excitement of it all. Here’s the main street as you enter the park (that’s Norm in the middle):

All the shops and eateries tie back into the theme of the park, which is movies.You can buy t-shirts and soft toys and all that usual stuff, but you can also buy fresh popcorn, and Oscar statuettes, and movie costumes.

So for our park – Viking World – all the shops, restaurants and stalls would need to relate back to Vikings. Surely it wouldn’t be hard to come up with some ideas?

Not for Norman and I; we’re tragic pun lovers. We set to work coming up with as many ridiculous names for shops and food places as we could. We also asked fans on our facebook page to come up with their best ideas, and some of these made it into the book. Shops and restaurants in the book include:

There were some wonderful ideas that unfortunately didn’t make it into the book:

The Last Viking Returns also includes some vouchers for the food stalls of Viking World. The food stalls can then be found in the pictures. For example: 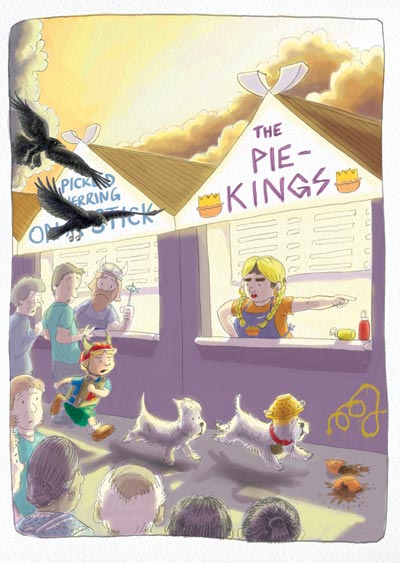 The rest of the vouchers are available in the Classroom Resources section of this website for you to download and use in class. Students can even have a go at making up their own silly Viking shops and restaurants.

Next time I’ll look at another part of Viking World: the Official Visitor Map.