Subscribers of my email newsletter The James Foley-O will know that I have a new book coming out in October. It’s about a pet rabbit that dies and comes back from the dead as a zombie; it’s called My Dead Bunny. It’s written by Sigi Cohen and published by Walker Books Australia. I’m busting to show you the cover! I’ll reveal more in the next couple of months. In the meantime, here’s some pictures of other zombie animals …

I’ve been visiting a lot of schools lately and testing the book on unsuspecting classes. I usually ask the class to suggest another zombie animal that I could draw, then the students draw their own zombie animal characters. The kids’ ideas have been hilarious. Here are my favourites. 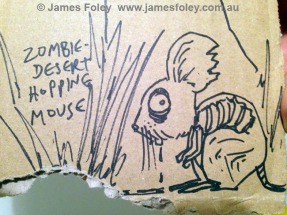 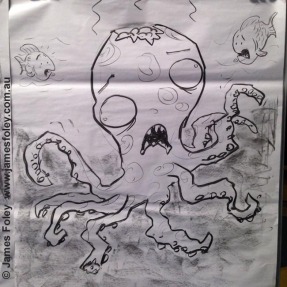 disco-dancing zombie Viking (an animal on the dance floor)

Here’s another that was suggested by students – a zombie cow …

… which I played around with in a photoshop demo at Great Southern Grammar last month, producing this:

This is pretty much the style of My Dead Bunny, just rougher; I’ve used a lot of found textures to render the backgrounds. The images are mostly black and white like old horror movies but with spot colours to highlight the zombie bunny.