Catalonians have some unique Christmas traditions. Their nativity sets are often elaborate, and each set must include a peasant figure called the ‘Caganer‘. This figure sits in the corner of the stable doing a poo. Seriously. Last Christmas I made some caganer figures for friends.

El caganer means “the pooper” (that’s the kid-friendly translation, at least). The traditional caganer is shown in the photograph above. From the front he looks innocent enough. From behind it’s a completely different story. Click through to see what he looks like.

In Catalonia you can buy traditional caganers as well as novelty versions depicting cartoon characters, politicians, sportspeople and celebrities.

A few years ago there was even a 19-foot tall caganer in a Barcelona shopping mall.

It’s not clear exactly how caganers came about, or what their purpose is. Some say they represent the fertility of the earth, and if you forget to include a caganer in your nativity scene you’ll have bad luck and your vegetables won’t grow. Others say the caganer symbolises our humility before God. It’s also a common children’s game to find the caganer’s hiding place in the nativity. Regardless of the original purpose, I just think they’re hilarious so I decided to make some.

I bought some air-drying clay and made some rough models. They weren’t intended to look like Tintin; I was just trying to make a simple hairstyle. Then I added some acrylic paint and voilá – DIY caganers. 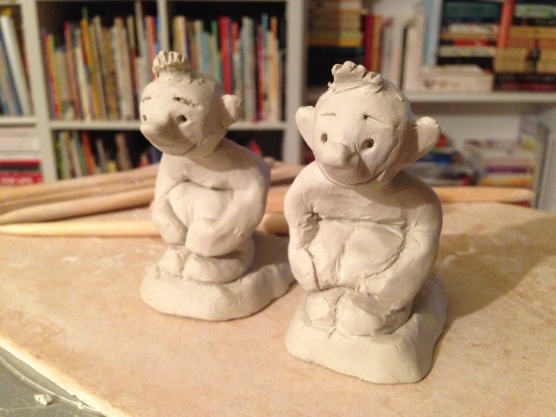 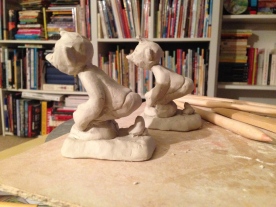 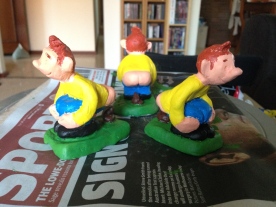 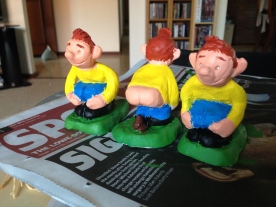 For more info on caganers, check out these links:

What is a Caganer and why is it part of a Catalan Christmas? (Time Magazine)

And if one scatological Catalán Christmas tradition isn’t enough for you, check out the Caga Tió (“poop log”).