Here’s a rundown of how I colour the Quokka cover each week. I’ll use the Easter cover as an example.

I use Photoshop CS3 and a Wacom Intuos 3 graphics tablet to do the colouring.

I do quite a few things to get to the colouring stage:

1. I draw a sketch at final print size, and get it approved by Quokka Press
2. I set the sketch onto my lightbox, and lay over some watercolour paper (190 gsm smooth)
3. I ink the lines in using ordinary black ink and a  Hunt 120 nib

4. I scan the finished linework (300dpi, ‘colour’ mode)
5. I save the original scan as a tiff file (and keep a copy separate)

6. I open up my ‘quokka template’ photoshop file- this has the correct dimensions for the cover, and the angled bottom border. I drag the tiff linework  into the template file and line it up in the right place. I rename the linework layer ‘lines’.

7. I adjust the levels of the lines (ctrl+L for PC users, cmd+L for mac users)- this is sort of like Napisan for black and white artwork. By adjusting the sliders, I can make the whites whiter and the darks darker. The histogram for black and white artwork usually looks the same every time- see the diagram below- there’s a little bump on the left, and a big curve going up to the right. I drag the white slider a bit to the left until it reaches the base of the curve.  I drag the black slider to the right, until it’s on the right-hand side of the little bump.

8. I add a layer mask to the lines layer. By painting in the layer mask with black, I can erase parts of the image- things like thumbprints, blobs of ink, and stray lines, for example. If I erase something then I want to bring it back, I paint into the layer mask with white. Very handy.

So- my linework is all cleaned up and ready to go.

9. First I set the ‘lines’ layer mode to multiply– this makes the whites see-through, but keeps the linework black, so that colour layers will be able to go underneath the lines.

10. I make new layers underneath the lines layer- a different layer for each set of objects in the drawing. The topmost colour layer is usually for the object closest in the foreground- in this case, the basket. The next layer is called ‘bilby, eggs’. I name each lower layer according to the order that objects appear in the drawing- in the foreground behind the bilby are the sprinkler and garden hose- then there are objects behind those objects, like the grass and bushes- and finally there are the objects right at the back, like the house, fence and sky.

11. When I start colouring an object, I first fill in any gaps in the linework with colour. (I could always make sure the lines in my drawing all joined up, then I wouldn’t have to do this step- but I like to keep my lines looser and more open). In this case, I’m using a photo reference of a bilby to get some colour ideas. I’ve selected a blue-grey colour that looks a bit like bilby fur. You can see the gaps in the linework are filled.

12. Now I can fill the bilby with colour. I use the magic wand tool to select the rest of the bilby’s internals… first I make sure I have ‘sample all layers‘ selected (this means the magic wand will use the lines layer as well as any other layers to detect an enclosed space).

I use a recorded action to fill the bilby with colour, saving time- the action expands the selection by 2 pixels, then fills with the foreground colour, then deselects. (I make the selection expand so I don’t end up with any little traces of white between the colour and the lines). 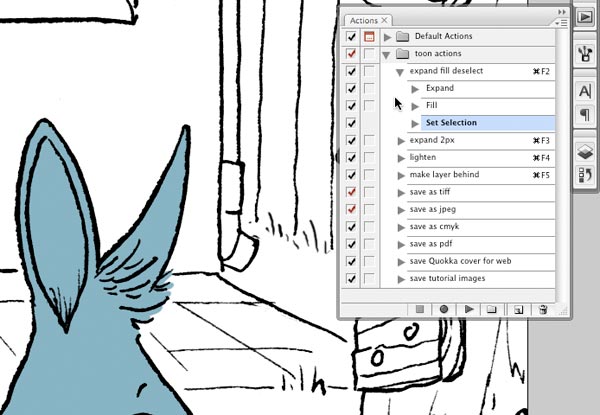 Here the bilby is filled with the colour.

13. Now I can add details. I’ve started adding in the the pink of his ears. If I click the little box (circled in the image), my paintbrush won’t go outside the areas I’ve already painted on this layer. Very handy trick to speed up your process.

Here I’ve finished the other fur details- lighter greys, and the darker patch on his tail.

14. My image already has a white background- so you’d think I shouldn’t have to add in white details. But I add these in manually.

It’s not because I’m a sucker for punishment- it’s because later on I will select whole objects so that I can shade them. I’ll need all the details of an object selected- even the eyeball and the teeth on this bilby, for example- and to make sure they get selected, I need to white them in.

To see where I’m painting in white, I add a temporary grey background to the image- see below.

15. I repeat steps 11-14 for every object in the drawing: filling in gaps in the line, then using the magic wand tool and fill tool, then adding details if necessary.

16. I muck around with colours until I’m happy with the balance overall. In the image below, I’ve started off with my standard grass colour; I’ve been filling in the gaps where the grass hits other objects, and I’ve started filling a large section. Once I’ve filled it all in, I realise that the colour isn’t right- the scene in the illustration will take place in early morning, so the grass colour should be cooler with more blue in it (except for where the sunlight hits it).

So, I use Image> Adjustments> Replace colour to change the grass colour to a nice cool green…

…then I paint in the warmer patch of yellow-green with the brush tool.

17. Fast forward a bit….  and now all my flat colour is added- see below. I’ve also added an extra layer on top of the colours, called ‘sunlight’- I’ve painted in some beams of light with a pale yellow, and the layer opacity set at 60%.

18. Now I add shading to each object- tones (i.e. shadows) and highlights. I add two new layers above the topmost colour layer- one of them is called ‘tone’, and the other ‘highlights’.

19. I set the ‘tone’ layer mode to multiply, and usually adjust the opacity to 40-45% (here it’s 77%). Multiply mode makes the purple colour semi-transparent, and helps it blend with the colours underneath.I usually set the ‘highlights’ layer to 40-45% opacity as well, but leave the layer mode as normal (here the opacity is a little higher).

20. Before I start shading, I get the light source sorted in my head. Here it’s the sun rising, peeking from around the side of the house in the background. Once I know where my light source is, I can start to think about where the shadow of each object will fall, and where the highlights will show up.

You may have noticed that there is no dashed selection line around the bilby. I’ve hidden it by clicking cmd+H (that’s ctrl+H on a PC).

23. Once I’ve added tone to the selected elements, I click on the ‘highlights’ layer, switch my foreground colour to white or light yellow, then start adding highlights to the object. I repeat the process for the objects in each layer.

24. When the image is all done, I save the psd file in RGB, then save a jpeg in CMYK mode and send it to Quokka Press. I also save a web-ready jpeg for this blog. That’s the job done for another week!

If you’d like to see this process in action, there’s a video on this post. I recorded myself sketching, inking and colouring the ‘Skydiving’ cover from issue 714… watch 2 and a half hours work compressed into less than four minutes.

I highly recommend this tute from Kazu Kibuishi’s site- one of his colourists, Alan Beadle, goes through the process of ‘flatting’ a page of comic art, in preparation for colouring. I picked up a lot of little tips from this tute. Go see how the pros do it 🙂

7 thoughts on “Digital colouring in photoshop”