I’ve mentioned before on this blog that all the characters are based in some way on people I know. That’s mostly true.

Josh’s Nan is based on a friend at my day job, Lea. They’re not similar in personality (Lea isn’t grumpy like Nan)- it’s more in the facial features… their hairline and glasses are very similar.

I wanted Nan to be non-stereotypical, so my original plan was for her to be a funky grandma (which Lea liked the sound of). But then when Pop became this cuddly bear-like Viking man, Nan needed to be more boring in comparison- good cop/bad cop.

Here’s one of the first sketches of Nan, from the first storyboard. This image changed, but I love the look of horror on Nan’s face. She’s upset because Josh has announced he’ll be worshipping the Norse Gods.

The original script had Josh being sent to Sunday School, but it was taken out… our editor Cate suggested that Sunday School wasn’t relevant to kids today, and we wouldn’t want to set up a theme of Christianity vs Paganism. Excellent point.

So, Nan’s a tough woman. Here’s a more recent sketch.

Josh’s dad and mum make few appearances in the book- only at the start and the finish. Dad is based on me. Not that I’m a Dad. But I wanted the dad to be easy to draw, so I picked a face I’m familiar with- my own.

The mum’s hair is based on a lady I met through my day job- she’d come along to a training session I was running, and she had this awesome bit of fringe hanging over her forehead and a big ponytail. I sketched her in a quiet moment, intending to use her hair for a character in a different story- but then Josh’s mum seemed to like it so she took it for herself.

Here’s the first scribbly sketch of Josh’s family around the breakfast table. 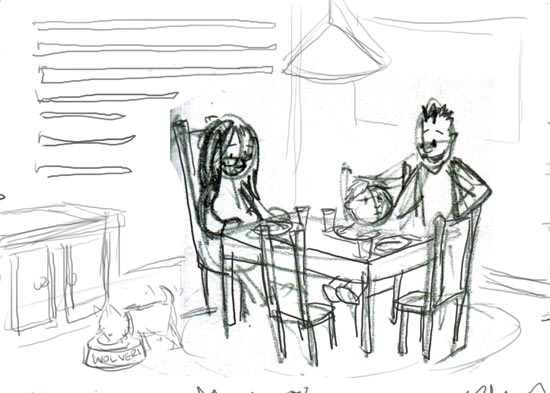 And here’s the final rough… 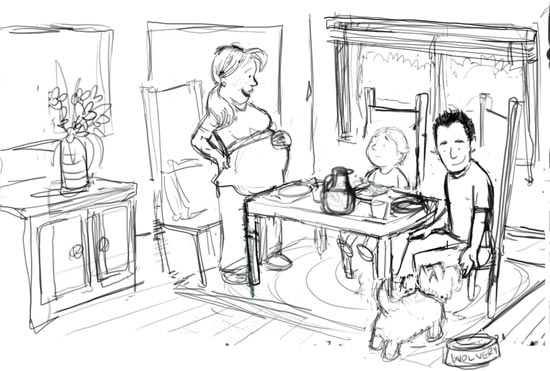 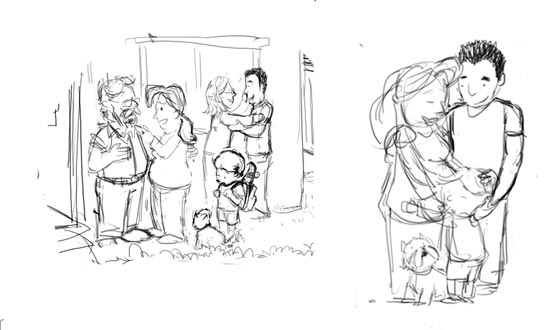