It’s August, which means Children’s Book Week is fast approaching. If you’re a teacher, maybe you’d like to use The Last Viking for one of your classroom displays. Here’s some examples that Norm and I have seen since the book came out.

In the example above, teacher Trevor Dent guided his students from Gidgegannup Primary in making a Viking ship display for the heARTlines Children’s Literature Festival 2011. The centrepiece is a ship painted on to card with a cloth sail. Students have illustrated characters from the book and their own original Viking warriors.

The picture below is a display from Year 1/2 H at Penrith, NSW. They coloured viking ships, swords and shields, and translated their names into runes along the bottom of the display. 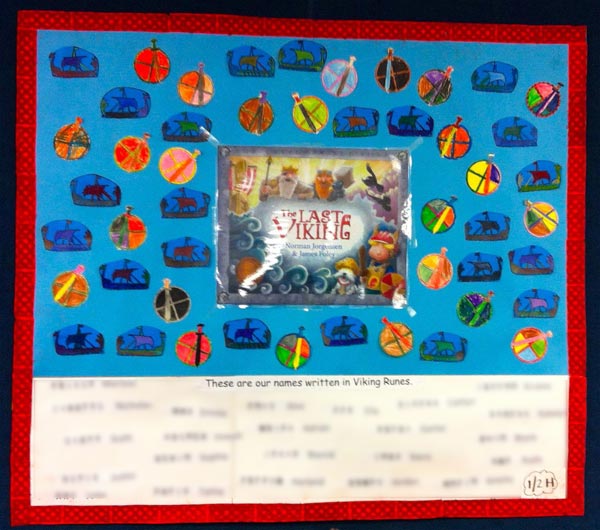 Below are two photos from a year 3 classroom at Rosalie Primary School. I visited them for their biennial writers’ festival and contributed some drawings. The foam lettering and cardboard viking ship were used in their assembly item (seen playing on the smartboard), in which they acted out the entire book! They performed an inspired closing number- ‘One-Eyed, One-Horned Flying Purple People Eater’. Odin and Thor would be proud of their stellar efforts. 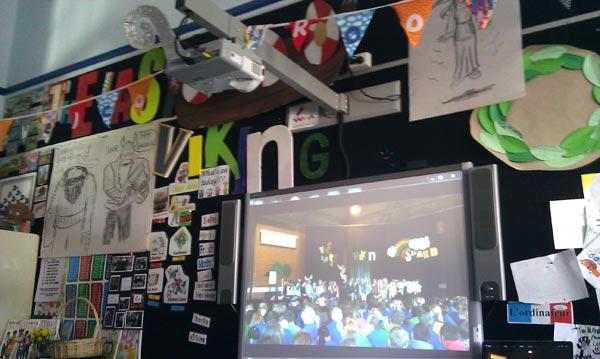 And finally, here are some illustrations by the same talented Rosalie Primary School year 3s. These are pasted to the front and inside of a thank you card the students presented to me. Norm got one too. We were gobsmacked at the creativity in this classroom (which probably has a lot to do with their fantastic teacher, Mrs Goods).

There’s more Viking-themed classroom resources on our Resources page. There’s blackline masters for colouring in, a ‘How To Read Runes’ worksheet, and links to activities on the web.

The Teachers page gives you some ideas about how to link The Last Viking in with curriculum, and provides a handy overview of this blog and sorts some useful posts into ready-made lists for you.
Norm and I love seeing the work that students make in response to The Last Viking. If you have any pictures of your own Viking displays or artwork and would like to share them with us via your blog, we’d love to see them- send us a link!

4 thoughts on “Prepare your classroom for a Viking invasion”