Today I’ll show you my sketches of a new character – a villain. He doesn’t have an official name, but I call him the Dragon King.

The Dragon King works at the Viking World theme park. He’s the star of the Fiery Funeral show that takes place each evening at Fjord Stadium. He leads the team of archers who launch their flaming arrows at the longship on the water.

He thinks he’s a celebrity but he’s really a silly old git. At the end of the book, Nan gives him a belting. I can’t say anymore or I’ll ruin the book!

Here’s my character reference sheet for the Dragon King.

I made a standard colour version of each character too, so that I could keep their colours consistent. Here’s the colour sheet for the Dragon King: 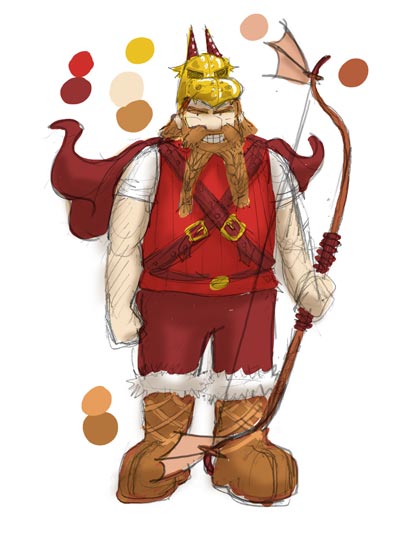 You’ll get your first proper look at the characters in action.