My new book is about a zombie rabbit. It’s written by Sigi Cohen and it’s called My Dead Bunny.

Last week I showed some reference sketches for the secondary characters (Mum, Dad and the sister) and the three main human characters (Sigi, Billy and Stan).

Today I’m showing some reference sketches for the eponymous character: the dead bunny.

As I mentioned in the previous posts, reference sketches are drawings of the characters that I do just before starting on final artwork. They help me get used to drawing the characters, and also give me something to refer to when trying to keep my final drawings consistent.

Bradley was once alive. We see him like this briefly towards the start of the book. I didn’t start with this character design; I started with his zombified version, and once that clicked into place I could figure out what his alive version would look like.

When Bradley is alive he’s made up of curves. This helps to make him look cuddlier and cuter.

But when Bradley is zombified, he loses his curves. His lines become more jagged and crooked. This helps him look rougher and more gross.
You can also spot some expression tests for the earthworm that lives inside Bradley’s head. 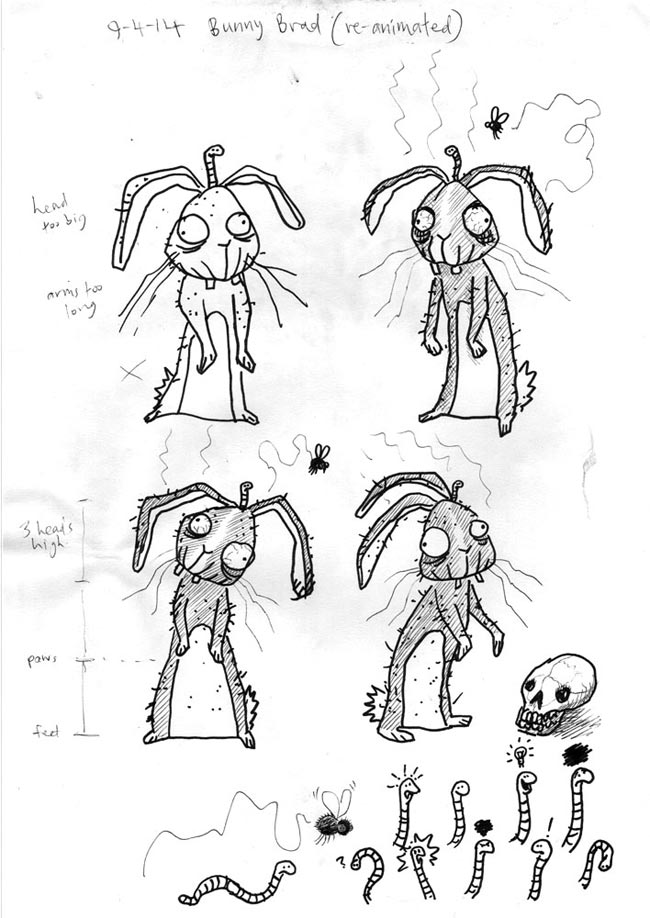 I also had to figure out how tall Bunny Brad was in relation to his human owner.

Here are more rough sketches of Bunny Brad when he’s alive versus when he’s dead; these were used as the basis for the front and back endpapers of the book.

My Dead Bunny will be set upon the world on October 1st.