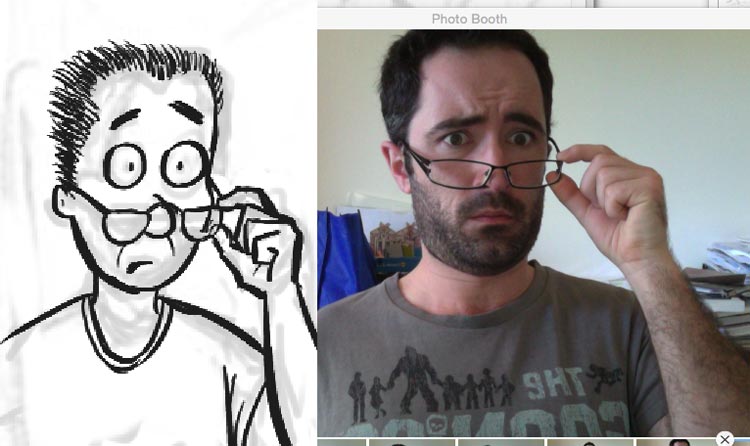 I’ve always found that hands are the hardest thing to draw. Here’s a simple technique I used to make things easier when I was illustrating my new book My Dead Bunny.

It’s super simple: if I get stuck on the hands of a character, I take a photo of my own hands in a particular pose, then draw the hands from the photo. (I often act out the facial expressions and body language too).

Here’s a bunch of screenshots showing reference photos and my own hand poses, along with works-in-progress from My Dead Bunny.

There’s a scene where the main character’s sister is carted off in an ambulance (don’t ask). I used a reference of Hannibal Lecter from Silence of the Lambs to get the trolley and straitjacket right; I also took a photo of my hand holding a tube to figure out how to draw the orderly holding the handle of the trolley.

The old American farmhouse was inspiration for the house in the book; fans of the TV show The Walking Dead may recognise the photo as Herschel’s farmhouse from season 2. 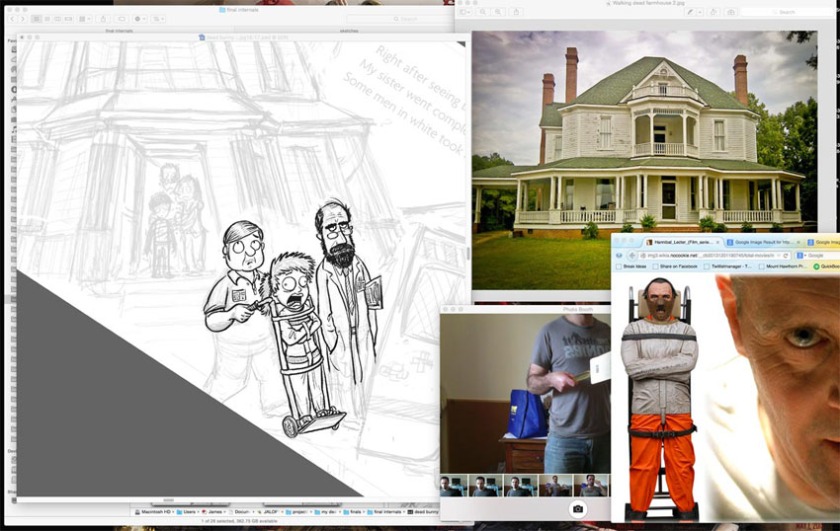 Progressing on from the last picture; I wanted to show the boy feeling a bit hopeless as his sister is carted away, so he’s holding his own hand in a gentle, unconscious way. Hands can be very expressive and show how a character is feeling. The hands became such a small detail in the illustration but I think it was important. 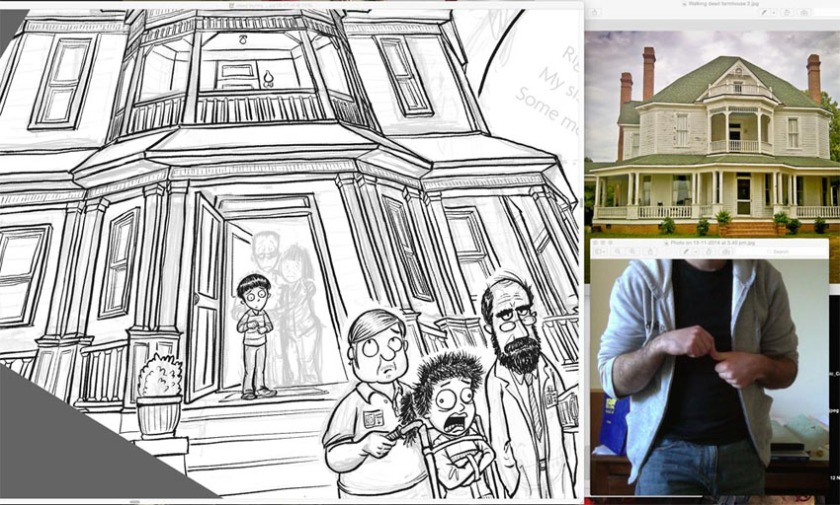 More hands, this time pulling a quilt up in fear. The photo was also useful for seeing the way the material creased in the hands. 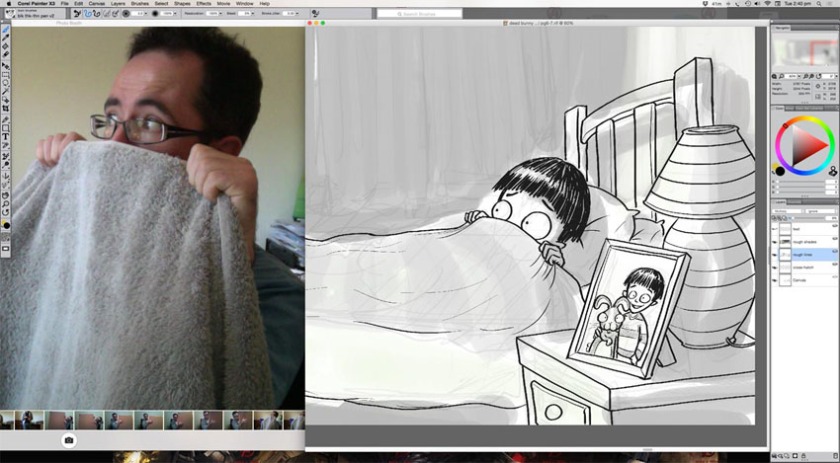 The reference photo (right) is a composite of three separate photos. I used an old pin up board as a prop so that I could figure out the angle of the hands on the tombstone in the illustration (left).

I believe that little gestures are really important to sell the reality of your characters, like the dad pulling his glasses down here. It was a tricky hand pose to draw so I needed to get a clear photo reference. 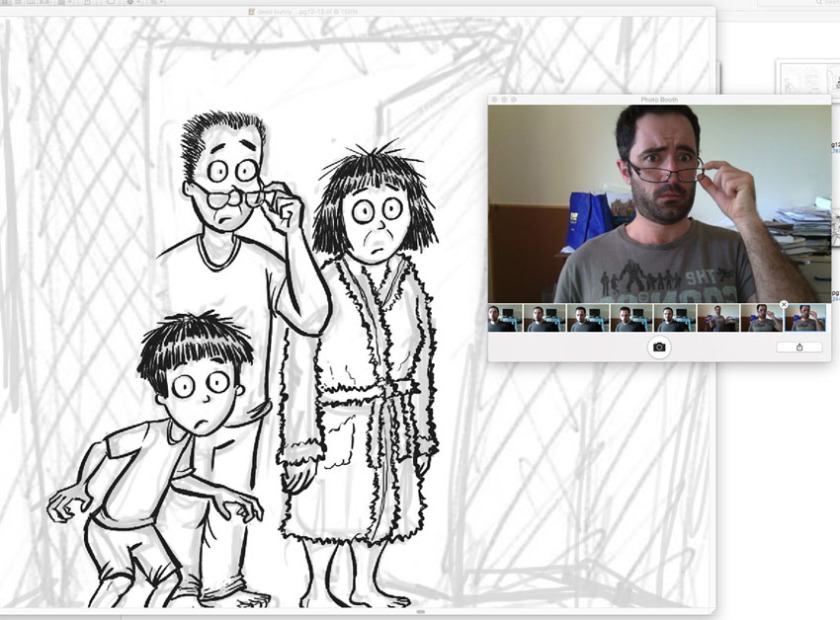 This one required a little imagination. I tried a lot of hand and arm poses until I settled on this one; I felt it had the right blend of panic and ridiculousness. 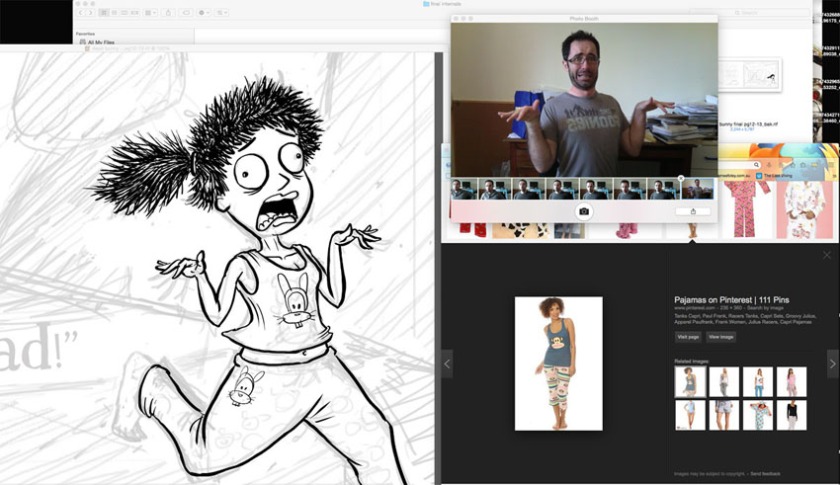 Here’s the final version of this scene, with accompanying text. 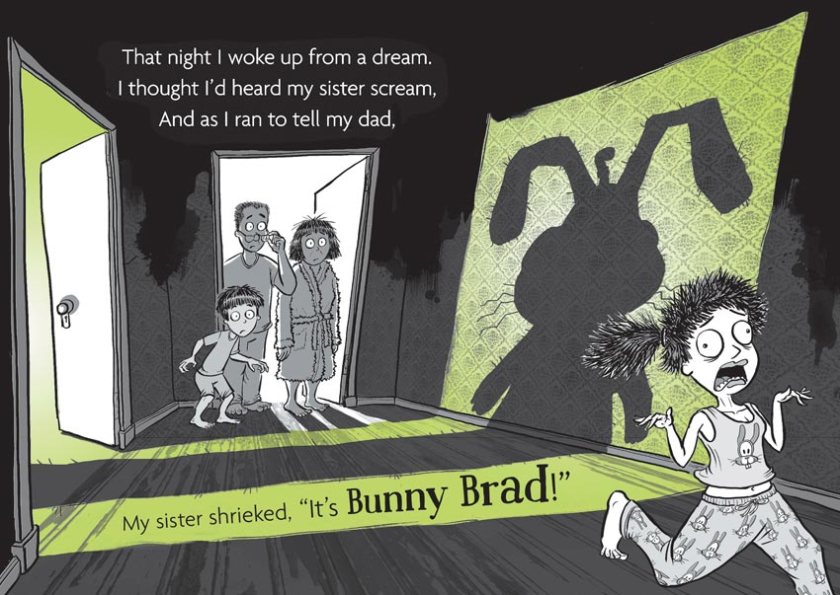 Do you have any extra tips for drawing hands? Add them in the comments below.

My Dead Bunny lurches into bookstores on October 1st.