I love seeing early sketches for a project. You can see how much work goes into a project before the final images are created, and it’s fun to spot glimpses of the final characters showing through in those first designs. I also like to imagine how different a story might have looked if the creators went with different designs to start with. It’s as if you’re seeing the story as it appears in a parallel universe.

Here are some early sketches for My Dead Bunny. Some spoilers below.

Here are the beginnings of the zombie cat. I was working out how best to show the bones in his tail.

More zombie animals – Bunny Brad plus another cat and a few dogs. I like the chihuahua; pity we didn’t actually show him in his zombified state in the book. At the top of this page I was sketching a Frankenstein set-up where they create the zombie cat. There’s also a tiny sketch of the last image of the page, with the dog’s paw breaking through the ground in front of his tombstone.

Here’s another version of the zombie cat, closer to the final – he now has the two toadstools as well.

Some very early sketches of the unnamed narrator and the bunny, drawn back in November 2013. The narrator’s hair is there, but no much else. I was trying something more stylised with the angular nose. Didn’t work. The bunny version at the top of the page looks massive, it’s a Bunnyzilla.

More random sketches. Looking for a style that might suit the tone. Trying different versions of the unnamed narrator and his friends. The bunny is closer to his final proportions and body language. Billy is getting his gangliness.

Later sketches of the boys. They’re in a different style to the finals (here they have dots for eyes rather than circles). The unnamed narrator and Billy are close to their final versions but Stan was still going through a few changes. 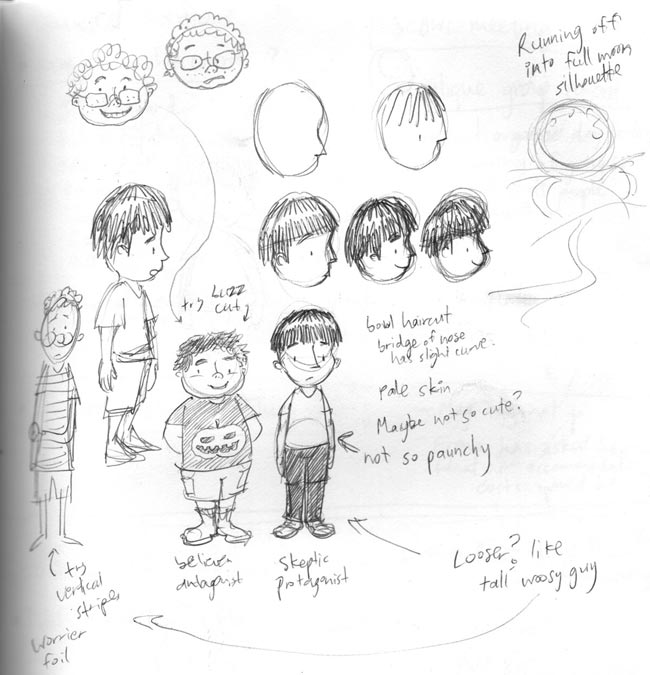 If you want to compare these designs to the final versions, check out these posts:

Meet the cast of My Dead Bunny (part 3) – Bunny Brad

Meet the cast of My Dead Bunny (part 2) – the boys